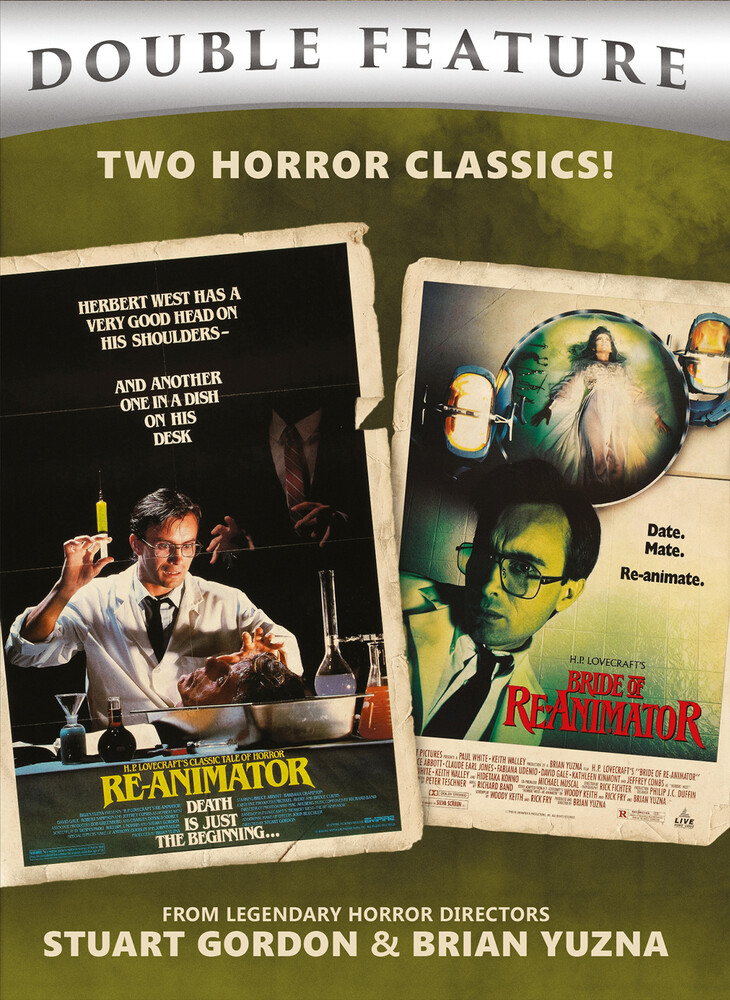 RE-ANIMATOR: HERBERT WEST HAS A GOOD HEAD ON HIS SHOULDERS... AND ANOTHER ONE ON HIS DESK. When medical student Dean Cain advertises for a roommate, he soon finds one in the form of Dr. Herbert West. Initially a little eccentric, it some becomes clear that West entertains some seriously outlandish theories specifically, the possibility of re-animating the dead. It's not long before Dean finds himself under West's influence, and embroiled in a serious of ghoulish experiments which threaten to go wildly out of control... Based on H.P. Lovecraft's classic terror tale Herbert West Reanimator and featuring a standout performance from Jeffrey Combs as the deliciously deranged West, Re-Animator remains the ground-zero of 80s splatter mayhem and one of the genre's finest hours.BRIDE OF RE-ANIMATOR: DATE. MATE. RE-ANIMATE. The success of Stuart Gordon's hit horror-comedy Re-animator meant that a sequel was all but inevitable. The resulting follow-up, Bride of Re-animator - this time helmed by director Brian Yuzna (Society, Return of the Living Dead 3 and Producer of the original Re-animator) - would prove that there was a good deal more life left in the story of Dr. Herbert West and his ghoulish exploits. It is 8 years since the Miskatonic massacre. Unperturbed by the disastrous outcome of his previous meddling with the dead, Dr. West (again played by Jeffrey Combs) continues his research into the phenomenon of re-animation; only this time, he plans to create life - starting with the heart of his young protégé Dan's dearly deceased, Meg Halsey. Surely nothing could go wrong? With special effects master Screaming Mad George (the man behind the infamous "shunting" sequence in Society) on hand to contribute a host of characteristically weird and wonderful creations - including zombified bats and a one-eyed finger spider - Bride of Re-animator is a more than worthy successor to Gordon's original cult classic.Media